Why is this important?

They travel throughout rivers to fulfil their lifecycles, some swimming more than 10,000 km! They navigate using the currents, magnetic fields, even their sense of taste and smell. Billions of people around the world depend on them for food, sport, research and intrigue.

Half of the migratory fish populations declined in half a century, and several species are going extinct. This threatens the primary food source of over 1 billion people, decreases biodiversity and puts life-sustaining river and marine ecosystems at risk.

Barriers in rivers block the migration routes of many fish species like salmon, eels and sturgeon. 55% of the migratory fish population declined in less than 50 years, mainly through habitat loss and degradation. In Europe alone there are more than 1,000,000 barriers. The number of barriers worldwide is growing and is expected to continue growing due to climate change.

To keep our seas and rivers full of fish, we need open rivers.

Restoring rivers is proven to be the fastest and most rewarding form of ecosystem protection. We have seen migratory fish returning the same day that one-hundred-year old dams are removed. We have seen marine and coastal fisheries revived because of growing migratory fish populations. Nature heals itself if we allow it to function as it’s meant to.

The opportunity: many dams built in the last century are old

and nearing the end of their concession. This means they must either be renewed or removed. Up to 25% of barriers no longer serve a function. Removing dams can be cheaper than maintaining them. We want to demonstrate to dam-owners and local communities that dam removals can be safe, rewarding and economically attractive. Rivers are the veins of the Earth. We want to inspire a 21st century generation to let them run free and heal.

A Foundation is born

To increase the profile of fish migration issues, the World Fish Migration Foundation's founder, Herman Wanningen, organised a local Fish Migration Day seventeen years ago in the Netherlands. To everyone's surprise, a thousand people turned up! In 2014, he organised an international event. Because of the immense success and enthusiasm of this event, the World Fish Migration Foundation was founded as a non-profit organisation. In 2018, more than 3,000 organisations in over 60 countries joined in on celebrating migratory fish. Collectively there were 570 events, reaching more than 70 million people. Meanwhile, thanks to growing awareness, almost all barriers in the region of the Dutch authority have re-opened for migratory fish in the past 20 years. With millions of barriers worldwide, we have a lot more work to do together. 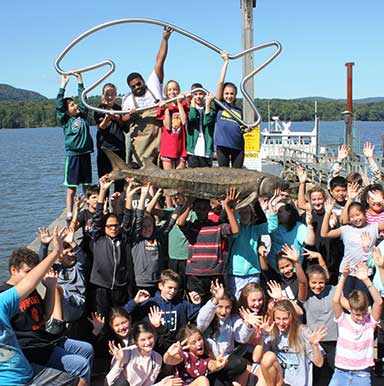 Rivers
need
you too!

River restoration depends on all of us. Support our work by making a donation.

I want to help!
Donate
Fill in your data to receive a download link